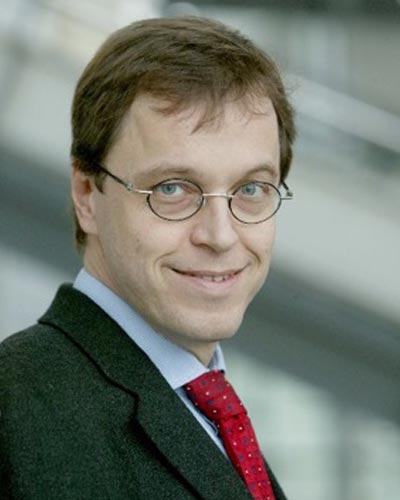 After an introduction into 3D laser nanoprinting and a brief review of the state-of-the-art in terms of spatial resolution and printing speed, I emphasize recent progress of my group, including rapid multi-focus multi-photon as well as multi-material multi-photon 3D laser nanoprinting. Furthermore, I shall cover our recent work on using two-step absorption instead of two-photon absorption which enables to replace expensive and large femtosecond lasers required in conventional setups by compact and inexpensive continuous-wave semiconductor laser diodes.

After completing his Diplom and PhD in physics at Johann Wolfgang Goethe-Universität Frankfurt (Germany) in 1986 and 1987, respectively, he spent two years as a postdoc at AT&T Bell Laboratories in Holmdel (U.S.A.). From 1990-1995 he was professor at Universität Dortmund (Germany), since 1995 he is professor at Institute of Applied Physics of Karlsruhe Institute of Technology (KIT). Since 2001 he has a joint appointment as department head at Institute of Nanotechnology of KIT, since 2016 he is one of its three directors. Since 2018 he is spokesperson of the Cluster of Excellence 3D Matter Made to Order.